How Much Is a Data Scientist’s Salary?

The average data scientist salary for an individual with 0-1 years of experience is $104,406, according to Glassdoor. The driving factor behind high data science salaries is that organizations are realizing the power of big data and want to use it to drive smart business decisions. And because the supply of data professionals hasn’t yet caught up with demand, starting salaries for these positions remain high ($50,000 to $95,000), especially for those who have an advanced degree in data science or a related field.

How Much Can You Make as a Data Scientist?

It’s no secret that data scientists can bring an immense amount of value to the table. Yet finding one person who can do all the tasks required of a data scientist is challenging, and competition over hiring these professionals is fierce. As a result, employers are willing to pay talented data scientists top salaries.

According to O’Reilly’s 2016 Data Science Salary Survey, experience is one of the most important factors in a data scientist’s salary. For every year of experience, data science professionals make an average of $2,000 to $2,500 more.

A 2017 Burtch Works study of data science salaries reported the latest salary trends based on experience:

Entry-level data scientist salary. Despite a recent influx of early-career professionals, the median starting salary for a data scientist remains high at $95,000.

In O’Reilly’s data science salary report, 45 percent of those surveyed said they hold the title of “data scientist.” Another 31 percent said they are upper management; an engineer, developer, or programmer; or other. In general, the more a data science professional engages in managerial tasks—such as leading team projects, identifying business problems to be solved with analytics, or communicating with external parties—the higher the salary. 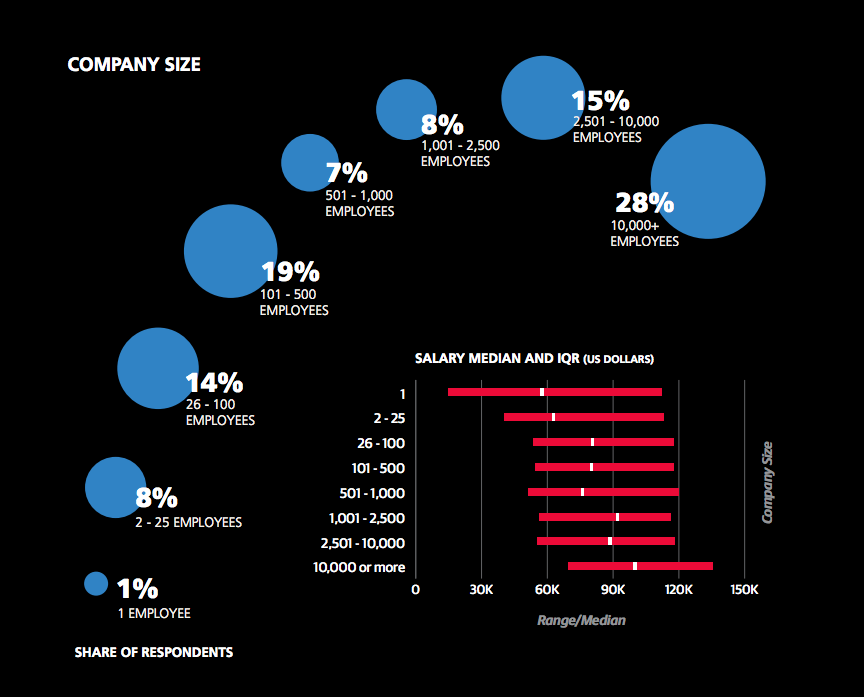 Data scientist
Those with the job title of “data scientist” are generally experienced, expert-level professionals in data-driven organizations, according to datajobs.com.
Salary range: $85,000-$170,000

The industries with the highest median data science salaries are:

It’s important to note that only 12 percent of data scientists surveyed by O’Reilly in 2016 worked in these three industries. Nearly 30 percent worked in either consulting or software (SAAS, web, and mobile).

Perhaps not surprisingly, some of the highest paid data scientists work at leading tech companies. Here are average salaries at several high-profile organizations:

Data scientists also need to wield the technologies that tame big data—and be able to learn the new and emerging ones—as well as open-source tools, cloud computing, and data visualization. It’s not enough to simply know how to use these tools, however; it’s crucial that data scientists know how to use them to derive actionable insights that will improve their organization.

Data scientists tend to have advanced degrees in quantitative disciplines such as data science, applied mathematics, statistics, computer science, engineering, economics, or operations research. But only a data science master’s degree will give you the precise education you need to be ready for a career in data science.

"The multi-campus nature of this program allowed us to build a truly interdisciplinary curriculum. In traditional single-campus programs, the data science faculty might be made up mostly of computer science instructors. But because our program draws interested faculty from across the University of Wisconsin System, our instructors bring expertise in computer science, statistics, business management, communication, and more. This broad base of knowledge and experience is a really big benefit of our multi-campus model. No one campus would have been able to offer a program like this on its own."

University of Wisconsin institutions offering the online Master of Science in Data Science are fully accredited by the Higher Learning Commission.

Copyright © 2017 Board of Regents of the University of Wisconsin System. All rights reserved.

Copyright © 2022 Board of Regents of the University of Wisconsin System. All rights reserved.