Whether it was publishing a book on machine learning or becoming a director at one of the world’s leading tech companies, the past year has been a busy one for Austin Hagerty. He credits much of his success to what he learned in the 100 percent online University of Wisconsin Master of Science in Data Science (MSDS) program.

“I would not be in the position I am if I had not gone through that program and had that foundational knowledge and practitioner knowledge,” he said.

But getting there wasn’t simple. Austin’s path to success resembled a winding road more than a straight line.

From Programming and Art History to Project Delivery

Before he was a published author and Director of Data and AI at Microsoft, Austin’s interests led him to several experiences in and outside the tech industry.

During the 1980s, Austin’s father worked in engineering at the onset of computer-aided design and manufacturing (CAD/CAM). Influenced by his father’s career and the many computers within his childhood home, Austin began programming at an early age.

He carried that passion for programming with him throughout high school and into college, where he pursued an undergraduate degree in physics at UW-Milwaukee. Austin grew to love the humanities courses he was required to take for his degree and saw a new opportunity to apply his background to an entirely different field.

“I actually switched to an art history major with a focus on leveraging data and statistics,” Austin said. “Because so much of [art history] was subjective at the time, I was very interested in taking a more empirical, data-driven approach. Having been so focused on technology in my younger years, it was incredibly rewarding to focus on the humanities.”

Austin graduated from UW-Milwaukee and later attended the University of California, Los Angeles (UCLA) for a post-baccalaureate in art history to dive deeper into the field and explore a potential career change.

“I didn’t want to be 70 or 80 years old and say, well, I stayed in tech and never explored that other potential path in life,” he said.

Although Austin appreciated his time at UCLA, he ultimately decided a career in art history wasn’t for him. With many of the art pieces he was studying being variations and copies of original work or stolen without context, the amount of data that could be analyzed in the field at the time was insufficient to drive meaningful insights.

Austin pivoted his focus back to the tech industry after college, working in project delivery as a project manager, program manager, and eventually portfolio manager. In those roles, he learned how to run a business and lead engineering efforts while still keeping his technical skills intact.

He then had an opportunity to lead a workforce analytics team at Northwestern Mutual in Milwaukee, which allowed Austin’s background and interests to converge. Shortly after starting this new position, he enrolled in the UW Data Science program to expand his data science knowledge and grow as a leader.

Download an overview of the online UW Data Science programs, complete with information about courses, admission, and tuition.

As Austin researched graduate-level data science programs, the Wisconsin native compared other universities and their tuition costs to the UW Data Science program.

“Many were incredibly expensive,” he said. “And for an online program, it didn’t make sense to invest $60,000 or $70,000 just to have the university name. Instead, I prioritized quality and program value. Reputation was also important, and UW has a fantastic reputation.”

The course list was another factor that stood out to Austin, as the UW program included diverse course offerings like DS 760: Ethics of Data Science.

“Having a class on ethics was perfect, because that’s a constant discussion item when you’re doing any workforce analytics problem,” Austin said. “You have to continually ensure that the analysis you are doing is fair and ethical.”

Other highlights of the program for Austin included taking courses on data visualization and analysis, data warehousing, and strategic decision making. 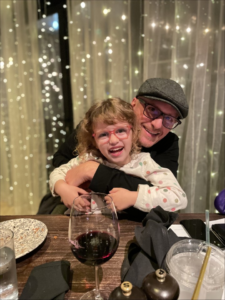 Because the UW Data Science program is 100 percent online, Austin benefited from a flexible learning environment where he could complete coursework anytime, anywhere. The online learning format was especially helpful when major life events took place, like when his family moved to a new city.

Although he graduated from the program with a 4.0 GPA, Austin’s experience did not come without some initial challenges. Since he had not taken a college course in many years, part of the learning curve was simply getting back into the rhythm of being a student.

“Learning how to learn is in many ways more important than just rote memorization of facts and course materials,” he said.

Fortunately, faculty were engaged and eager to provide support when Austin had questions or feedback. He also received help from Senior Success Coach Michael Paul and Dr. Jeff Baggett, the assigned student advisor from his home campus of UW-La Crosse.

Austin found a sense of community in the program. He enjoyed working on group projects and meeting other students through discussion sections, which resulted in interesting networking opportunities.

“I actually ran into [a former classmate] a couple of years later on the job,” he said. “And we just happened to recognize each other’s names, living in Texas, of all places. A big part of grad school is who you meet, the connections you make, and developing that passion and career support as you move forward.”

Austin’s determination led him to complete the program in two years, a rapid pace for students working full-time.

While enrolled in the UW Data Science program, Austin immediately applied the knowledge he learned in the courses to his work as Assistant Director at Northwestern Mutual.

“I wasn’t doing a lot of the coding myself, but [I learned how] I could guide the team and step in where they didn’t have skills,” he said. “It helped me be a better leader.”

Austin credits the skills he acquired from the UW Data Science program for the career growth that followed. He used the knowledge and experience gained to help organizations build and grow data science functions and realize the value of data. His latest endeavor as Director of Data and AI at Microsoft opens new doors to driving impact.

“It is a great way to expand [my] knowledge, to help [Microsoft] deliver value for customers through data science, and it’s in a field that is growing and booming,” he said. “There’s a lot that I’ve learned over the years too that I’m able to apply [to this role] because of the UW program.”

Writing the Next Chapter

The UW Data Science program has helped elevate Austin’s career in more ways than one.

“Each step of the way, the program has benefited me,” he said. “I’ve been able to be an effective data science leader because I can understand the concepts and speak the language.”

This includes written language as well—two months after accepting his position at Microsoft, Austin published Introducing HR Analytics with Machine Learning: Empowering Practitioners, Psychologists, and Organizations. What started as his capstone project in the program turned into a full-fledged book when Austin formed a networking connection with Christopher Rosett at an analytics conference.

Rosett was impressed by Austin’s R programming language presentation at the conference and asked if Austin was interested in co-authoring a book with him.

“I wouldn’t have been able to write that book without the knowledge I gained in the UW program,” Austin said.

If Austin’s story is any indication, there are several ways to achieve success in the field of data science. His advice to prospective students? Focus on mastering the core elements and understand how to find and leverage new information. Students should also keep an open mind and have a desire to learn.

“There’s a lot of different paths you could take with a program like this,” he said. “And from a career perspective, stay curious. Stay intellectually hungry. Keep learning. This is not a static field.”

Want to learn more about the UW Master of Science in Data Science? Talk with an enrollment adviser by emailing learn@uwex.wisconsin.edu or calling 608-800-6762.